Fort Rampart, cargo of 1400 tons metal and 7300 tons lumber was sunk by U 628 and U 226 on Apr. 17-1943, 6 died - Stoker James Turnbull Douglas, Stoker Anthony Grimes, Stoker Thomas Hutchinson, Stoker Samuel Tait, Ordinary Seaman Gerard Lively, and Ordinary Seaman William Etherington Magee. 3 were injured - Able Seaman Ambrose H. Carr, Able Seaman Alexander Lengstone and Oiler Harry Mitchell. 49 survivors were picked up by Arvida, 3 men who were in need of medical attention were taken aboard Duane (this according to the website I've linked to below).

Lena Luchenbach had originally been in station 81, but having problems keeping her station, she was moved to the empty spot in station 105 (presumably because there would be fewer ships to collide with there). On Apr. 20, James Fenimore Cooper, originally in station 95, was moved to No. 102. Early that same morning, the 2 ships collided. (This seems rather odd to me, in that it would seem easier for the 2 to collide if they were sailing next to eachother in stations 95 and 105, than if one was in 102 and the other in 105, as was the case according to Haskell. The strange thing is, Haskell states on anotheer page that James Fenimore Cooper was in station 95 when the collision occurred, but says it happened on the night of Apr.-18). Lena Luchenbach was abandoned and the 63 crew picked up from lifeboats by the American M/S Lightning sailing nearby and taken to Liverpool. Lena Luchenbach was salvaged by the escorting corvette HMS Bergamot. Later beached at Kames Bay, repaired and returned to the U.S. in convoy ON 196 in August that year. Made another Atlantic crossing in HX 270, condemned on Aug. 4-1944 and sunk at Arromanches as part of the Gooseberry I breakwater. James Fenimore Cooper had also been damaged in the collision and was escorted to the River Clyde by HMCS Arvida, another escorting corvette. 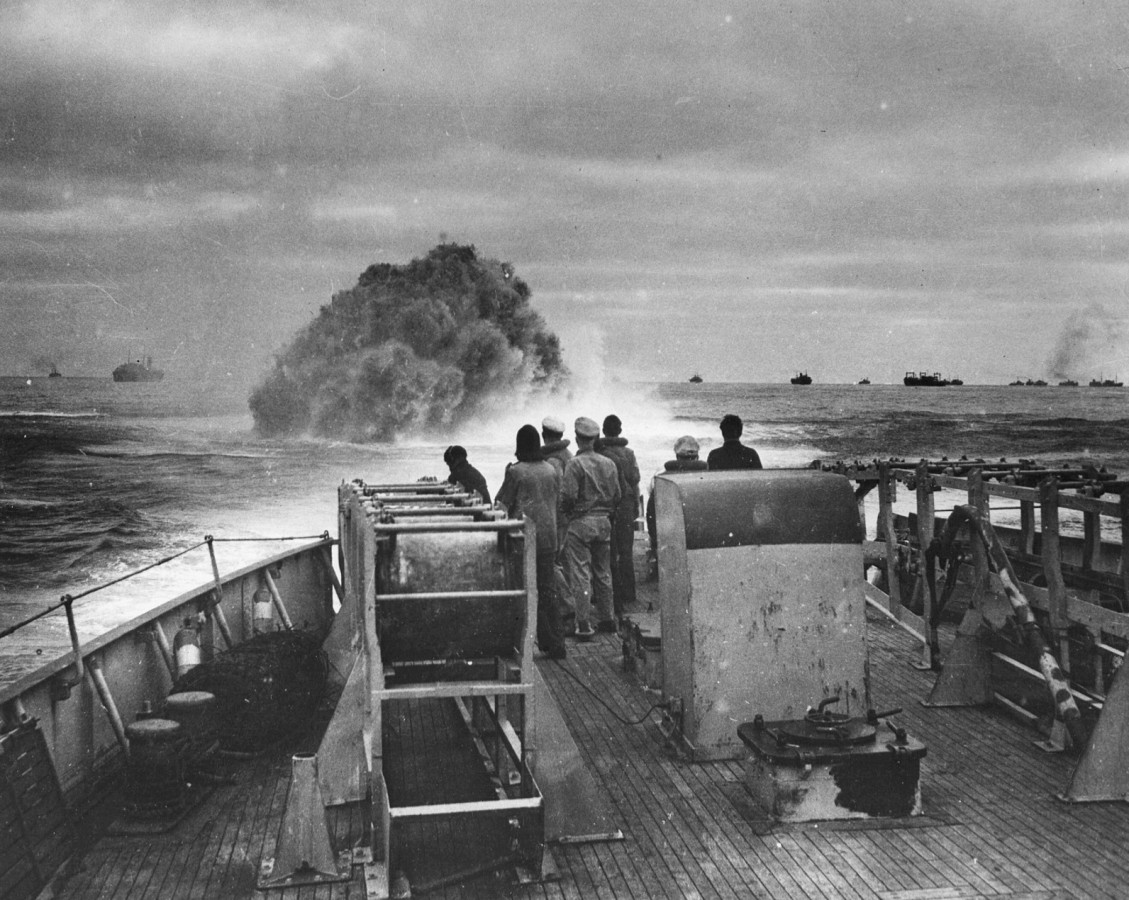 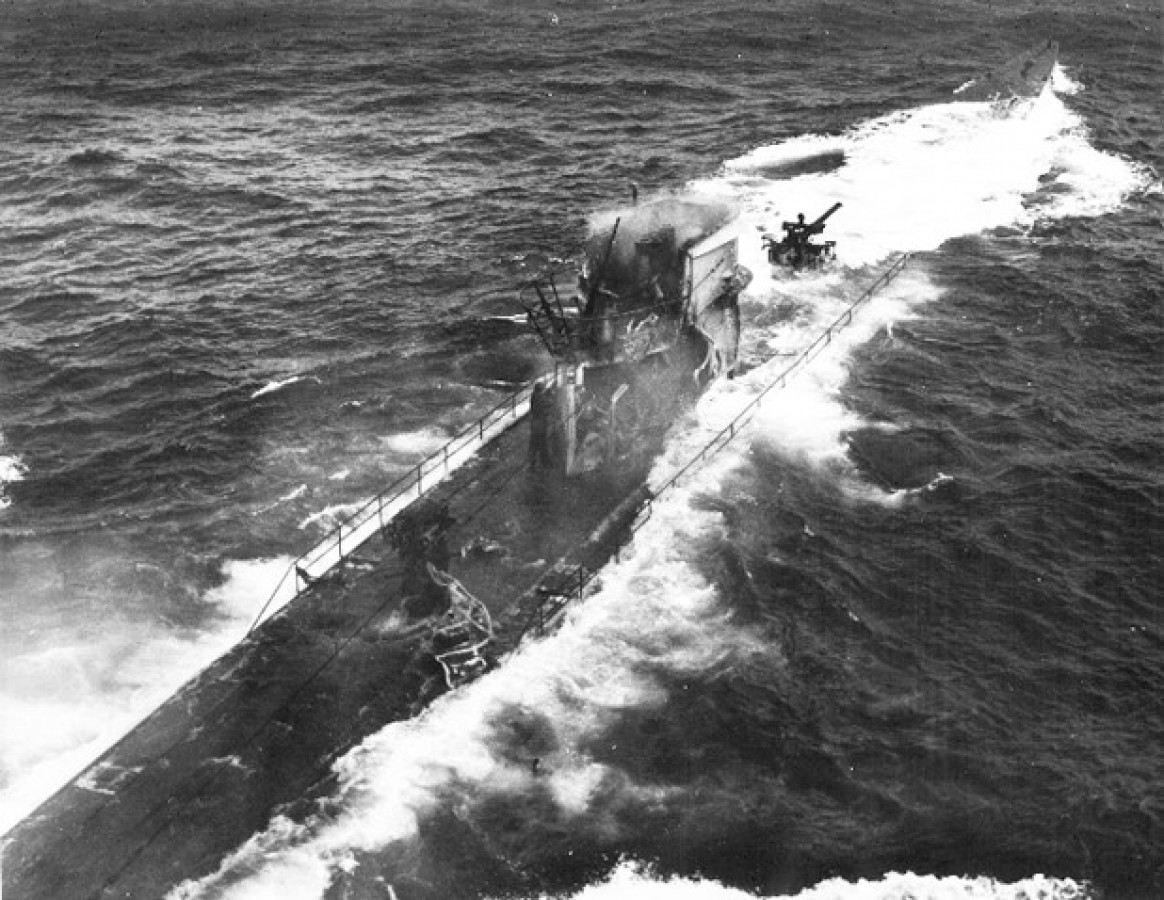 At 11.30 hours the same day, U-628 hit the straggling Fort Rampart with a coup de grâce, but the vessel did not sink, until 03.26 hours on 18 April, when U-226 finally sank the ship about 900 miles east-northeast of the Azores with a coup de grâce and gunfire.

The Fort Rampart (Master William Henry Stein) was on her maiden voyage. Six crew members were lost. The master, 40 crew members, six gunners and three passengers (DBS) were picked up by the HMCS Arvida (K 113) (Lt D.G. King) and landed at Greenock.

I boken "The Defeat of the German U-boats: the Battle of the Atlantic" (David Syrett, Univ of South Carolina Press, 1994) står det følgende om konvoien (side 37-41):

By 11 April the Allies knew the general location of the major concentrations of U-boats including the Meise group, and it was clear that the U-boats were moving westward toward Newfoundland and away from Ireland and Iceland. It was thought by the Allies that the U-boats were moving away from the VLR B-24 Liberator aircraft based on those islands because Allied aircraft at Newfoundland could operate only some 500 miles northeast of St. John's. In response to the German deployment, the Allies conducted what was termed a "somewhat bold expedient" by routing convoys northward and southward around the U-boats.

The main risk was thought to be run by those convoys routed to the south, for a great part of their voyage would be through "an area remote" from Allied air bases. The first convoy to risk the run past the Meise line was successful: westbound ON 177 sailed from Liverpool on 6 April on a northwest course to 60°10'N, 26°36'W before turning onto a southwest course. The convoy arrived safely at New York after a voyage of seventeen days without being contacted by any U-boats. At the same time, two eastbound convoys - HX 233 and SC 126 - were sent to Great Britain from North America along a southern route designed to pass southward of the known concentrations of U-boats. This plan would have succeeded but for the fortuitous sighting of convoy HX 233 by the U-262.

The fifty-seven merchant ships of convoy HX 233 sailed on 6 April from New York escorted by Escort Group A3, commanded by Captain P. R. Heineman, USN, and consisted of the Coast Guard cutters USCGC Spencer, USCGC Duane; the destroyer HMCS Skeena; and the corvettes HMCS Wetaskawin, HMCS Arvida, HMS Diantbus, HMS Bergamont, and HMS Bryony. HMCS Skeena and the USCGC Spencer were equipped with HF/DF. HX 233 and its escort proceeded eastward without incident for ten days. Meanwhile, SC 126 sailed from Halifax on 8 April and proceeded behind HX 233 along approximately the same course.

At 0434 on 15 April, U-262 by chance sighted HX 233 to the east and south of the Meise group. The U-262 was outward-bound to the Gulf of St. Lawrence to attempt to pick up a number of German prisoners of war who had informed the BdU of their plans to escape and requested that a U-boat pick them up. After sighting HX 233, the U-262 was ordered to maintain contact with the convoy and was given freedom to attack. As the U-boats of the Meise group were too far to the west to intercept the convoy, five outward-bound U-boats (U-626, U-175, U-226, U-258, U-264) were ordered to attack HX 233. But these U-boats, being at some distance from the convoy, would need considerable time to intercept the Allied force."

The first indication of U-boat activity came on 15 April, when four U-boat radio transmissions made at some distance from the convoy were intercepted. At 0340Z on 16 April the USCGC Spencer, 4,500 yards ahead of HX 233, obtained a radar contact. This was U-262 attempting to attack the convoy. The contact was at a range of 7,100 yards from the Coast Guard cutter bearing 150°. USCGC Spencer ran down the bearing and at a range of 3,200 yards the target disappeared. But at 0410Z sonar contact was obtained and a depth charge attack was undertaken without result. Sonar contact was quickly regained, and the American warship attacked the U-262 with a mouse trap rocket launcher without effect." HMCS Wetaskawin joined the hunt and at 0620Z the USCGC Spencer regained sonar contact and again attacked with a mousetrap without effect. Sonar contact was soon lost and after continuing the hunt for several more hours, the Allied warships resumed their positions on HX 233's screen once the convoy had steamed past the area." After being driven off by the escort of HX 233, the U-262 continued westward on its mission to the Gulf of St. Lawrence.

U-boat contacts with HX 233 multiplied overnight. At 2127Z on 16 April, the U-175 reported that it was in contact with a destroyer. Seven hours later the U-382, another outward-bound U-boat, reported "CONVOY IN SQ BE 4837, COURSE 090, SPEED 8." These radio transmissions were quickly followed by several more contact reports from other U-boats. The BdU at 1044Z ordered additional outward bound U-boats to operate against HX 233 and "IN VIEW OF THE EXISTING AIRCRAFT SITUATION" to be ahead of the convoy that night or at daylight the next morning.

The first contact on April 17 between the U-boats and HX 233 occurred at 0412Z when the USCGC Spencer obtained a radar contact ahead of the convoy. As the American warship ran down the bearing, the U-boat submerged. The USCGC Spencer, joined by HMS Diantbus, began a sonar hunt for the U-boat. Sonar contact was gained and at 0512Z the USCGC Spencer made a depth charge attack without result. The sonar hunt resumed, and another depth charge attack was made at 07542. At 0820Z sonar contact was again obtained and a fruitless attack was undertaken with a mousetrap. After this attack the hunt for the U-boat was abandoned, and the Allied warships steamed to rejoin the convoy, for HMS Dianthus and USCGC Spencer were now 10 miles astern of HX 233.

While HMS Dianthus and USCGC Spencer still trailed HX 233, HMCS Skeena obtained an HF/DF bearing off the port bow of the convoy. This bearing was run down by the Canadian destroyer, but nothing was found. While the three Allied warships hunting U-boats were absent from the convoy's screen, the U-628 torpedoed the merchant ship Fort Rampart at 0605Z. After their vessel was hit aft on the starboard side, the crew of the Fort Rampart abandoned the ship and were picked up by HMCS Arvida. The merchant ship drifted clear of the convoy and was later sunk by Allied forces.

Both Guard cutters opened fire on the U-175 and were immediately followed by several merchant ships in the convoy. The USCGC Spencer turned toward the U-175 to ram, but Heineman, the escort commander, ordered ramming avoided if possible for the Germans could be seen abandoning the U-175. As the USCGC Spencer passed near the stern of the U-175, a number of Germans were visible in the water, and the U-boat appeared to abandoned "but still afloat with way fairly good trim." The Americans decided to attempt to capture the U-175 and sent a party aboard. However, as the Americans boarded the submarine began to sink stern first, and even though the Americans managed to get into the U-boat's control room, the enemy vessel could not be salvaged and soon sank. Some Germans from the U-175 were later picked up by the Allies, and one Coast Guard member on the USCGC Spencer was killed by friendly fire."

Even before the sinking of the U-175 in the early afternoon of 17 April, the Allies began to turn the tables on the U-boats. At 0847 destroyers of the 3rd Escort Group (HMS Panther, HMS Penn, HMS Impulsive, HMS Offa) arrived to reinforce the convoy. The Allied destroyers swept along the port side of HX 233 and then went astern of the convoy. At 1130 a U-boat was sighted by HMS Panther, was forced to submerge, and was then hunted for several hours without result. At 1630 the first VLR B-24 Liberator from Northern Ireland arrived over the convoy to provide air escort through the next day. There were several more contacts between the U-boats and the escorts of HX 233, but the threat to the convoy passed with the U-175. At 0024 on 18 April the BdU ended the operation against HX 233 because of "the anticipated intensified air activity that day."

Astern of HX 233, convoy SC 126 passed to the south of the Meise group of U-boats and was not attacked. HF/DF intercepts indicated to the convoy's escorts that they had been sighted, but no attack developed. On 16 April the Germans concluded, mostly from radio intelligence, that SC 126 was south of the Meise group, but found it "impossible to form a clear picture of the approximate convoy area or course." And by 17 April the BdU had concluded that "it can be no longer possible to intercept SC 126 with Group Meise." SC 126 arrived in the United Kingdom on 23 April without incident."

The passage of convoys ON 177 and SC 126 without loss and the HX 233's voyage with only one ship sunk were triumphs of Allied intelligence and routing. The Allies knew where the Meise group was operating and successfully routed ON 177 northward and SC 126 southward around these U-boats. HX 233 was successfully routed to the south of the Meise U-boats, but by chance ran into the U-262, thus enabling the BdU to divert several outward-bound U-boats to intercept the convoy. The resulting battle was not in favor of the U-boats because of the convoy's strong defense by the escorts and the Allies ability to reinforce the convoy quickly with air and surface escorts - only one merchant ship was lost in exchange for the U-175.